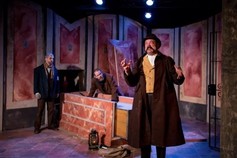 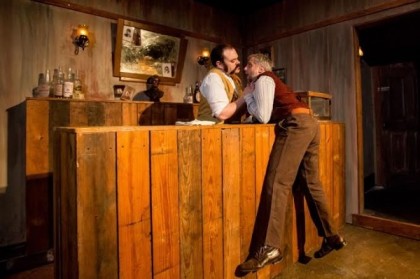 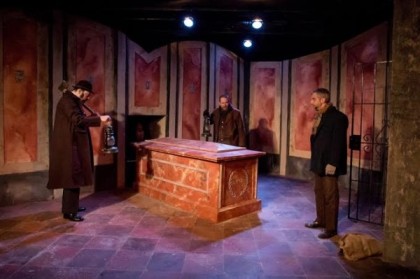 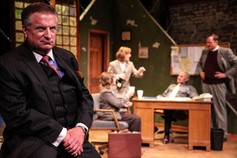 "I cannot say that I would see this show a second time necessarily. However if I did see Other People’s Money again, it would be two reason and two reasons only. The first would be for the set design by Andrew Hildner. The theater is set in a proscenium setting. The stage is split, with one side being depicted as a skyscraper on Wall Street. With enormous windows that scaling from floor to ceiling, a marbled floor, expensive leather chairs, even equipped with a fast-talking, loud mouth, ruthless businessman named Lawrence Garfinkle, played by the commanding presence of Ben Werling. As you travel stage left, you suddenly appear in a small, beaten down office in Rhode Island; the home and foundation to a simple hardworking business owner, Andrew Jorgenson (Doug McDade).

While, yes the design of the set is creative, it is more importantly, smart. Smart because it allowed director Dennis Zacek to transition easily from scene to scene. Smart because the design utilized the space, I think, while creating something visually interesting to look at."

"A special call out is needed for the simple set of this play designed by Andrew Hildner, which juxtaposes the rundown factory in New England to the no-expense spared surrounds of “Larry the Liquidator”.    This simple set enables the actors to move back and forth quickly and all action to move at the fast pace that the script merits."
~ Amy Munice, Splash Magazies

"Adding much is Andrew Hildner’s bifurcated set, with Larry’s plush marble and cold headquarters office a contrast to Joregenson’s weathered and battered office, with its peeling paint and smudged windows."

"The set design is excellent in that allows that characters in different places to speak to the audience at the same time while also showing the drastic difference between the office of a wall street tycoon and a blue collar factory owner."
~Joseph Hillenmeyer, Showbiz Chicago 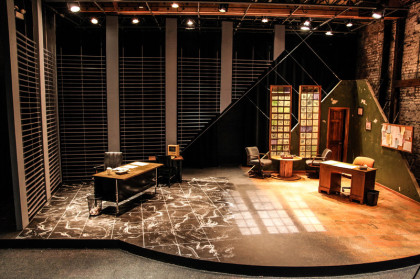 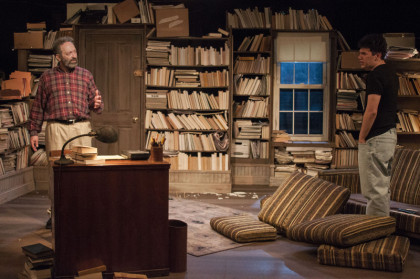 "He let this show be about the performances, making sure every design element was what they needed. From the smell of the old books, to the dollhouse of a kitchen, this was a rent controlled New York City apartment in the early 90’s. And they didn’t have to spend a million dollars to make it so. Cudos to set designer Andrew Hildner. Simplicity, ingenuity, and intimacy are the things that storefront theatre, when done well, excel at. This is a prime example.
Highly recommended."
~ Olivia Lilley, Chicago Theatre Review

"Andrew Hildner’s set, a drab apartment lined with shelves filled with books their spines turned to the wall, gives off a beige, melancholy ambience that from the first scene sets the mood for this dissection of an unfulfilled life."
~MARY HOULIHAN, Chicago Sun Times